It’s a comfortable living room in the heart of St. John’s, complete with a fireplace, hardwood floors and big easy armchairs.

But the conversations that take place here are anything but easy – most of the time.

Today, three women who prefer not to reveal their identities are talking about their battle with addiction – in their cases, alcohol. The chats are peppered with comments like “Thank God I finally came to my senses – better late than never.” And: “I would never say to my family what I say here.” Or: “This keeps me sober, straight and on the right path – or I probably would be dead.” 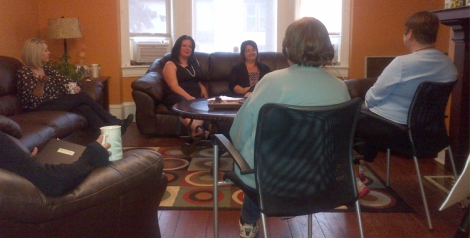 It’s heavy stuff in the middle of the afternoon, and yet – bit by bit – the weight is lifting from these women’s lives, as they confront harmful addictions that have largely been hidden from view. Until now.

This is the site of a ‘women’s only’ adult addictions counseling group, a small group that’s making a big difference to those trying to deal with substance use and abuse.

It began in 2009, when social workers from the Mental Health and Addictions Program of Eastern Health and the community-based Stella’s Circle joined forces to tackle an issue not generally discussed, and riddled with stigma in a way that men’s addictions often are not.

“There is a perception among women themselves that addiction is not ‘ladylike,’” says Michele Pike, an Eastern Health social worker, and one of the group’s facilitators. “They feel that ladies don’t smoke or drink or ‘stagger.’ There’s more of a stigma with women.”

Alcohol appears to be more dominant among women, although some use street or prescription drugs along with it.  Depression often accompanies their addiction, and some women engage in shoplifting or the sex trade to feed their addictions, which can compound a sense of shame.

“I hid it,” says ‘Renee,’ a 50-year-old working, single parent, who’s been attending the group for four and a

half years. “I was a closet drinker, and I was ashamed. I tried to keep it in the closet – but it was overflowing!”

“For the longest time, I would just sit there, listening to others and saying, ‘that’s not me – why am I here?’”

Renee says the turning point came when she realized no one was judging her, just offering support. “I finally let them in, and acknowledged I really did have a problem that I needed help with. I used to go into detox and sometimes the addiction was overwhelming…I couldn’t do it on my own and I’m really grateful for the help.”

The women who attend the meetings are a cross-section of society: students, professionals, sex trade workers, mothers, pregnant women, straight and gay. They come from a variety of ethnic backgrounds and the ages range anywhere from 18 to 65-plus.

But there a couple of criteria to join the group:

“We don’t require that they completely stop their addictive behaviour,” says Amy Sheppard, a social worker with Stella’s Circle. “We realize that it’s a process. And there’s no stigma placed on the women if they slip – they can always come back to the group at any time.”

However, many women do stop their addictive behaviours. They also learn to recognize the warning signs before a crisis.

“It was helpful to see the problems the others were having,” says ‘Kristine’ a 58-year-old who has just battled cancer in addition to her alcohol addiction. “I think it’s big of all of us to admit we have a problem – and seek help along the way. 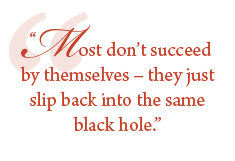 “Most don’t succeed by themselves – they just slip back into the same black hole.”

‘Deborah’ agrees. Now 52, she began to drink in her late 30s. At the height of her addiction, she was drinking 20 bottles of beer every night. She joined the group in the spring of 2013, and immediately felt at home with the other women, who meet in groups of five or six.

“I like the small group setting. This is my home base, and it’s a nice feeling,” she says. “Even a simple bit of friendly advice like: ‘just breathe, or count to 10’ really helped me a lot.

“I also like the confidentiality. What’s said here stays here. I’d never say to my family what I say here, because when you hurt your families, you feel guilty and then you drink to block out the guilt.”

“Families don’t always understand,” adds ‘Renee.’ “Your family might think it’s simply a matter of using willpower, but the women here have an awareness of the struggles and falls in an addiction.”

A women-only group is not that common in the province, when it comes to addictions counseling. But it’s an approach that really resonates with them, according to the group facilitators.

Site of Women’s Only Addictions Group.

“In a mixed group setting, women find that men can be more dominant in the conversations, and they can feel more vulnerable,” says Michele. “It’s a different dynamic with just women – they don’t feel judged. Traditionally, substance abuse treatment has been accessed more by men, so by offering this group we’re giving women an avenue for help. There’s no reluctance – it all comes out freely.”

“We very quickly throw our agenda out the window, at times,” Amy adds with a smile. “It’s very much directed by the women themselves as to what they say to each other. We just facilitate to keep them on track.”

And they are finding their way back on track. More than 75 women have participated in the group since it began, and if the ones we spoke with are any indication, it’s been a tremendous support. Especially in Newfoundland and Labrador, according to Renee, who says for many people, drinking is part of the culture. “So if you need someone to talk to, this is a nice place to start.”

And when you emerge on the other side of addiction? “The nicest thing is not waking up with a hangover – the world is a lot nicer,” says ‘Deborah.’ “It’s not just a matter of saying thank you for this group – it’s thank you for my life.”

“What a beautiful place this world is,” adds ‘Kristine.’ “I mean, I went through life in a fog – and now the fog has lifted!”

This story was written by Deborah Collins, a Communications Manager with Eastern Health, based in St. John’s.

One response to “Battling the ‘Black Hole’ of Addiction: A Good Place to Start”