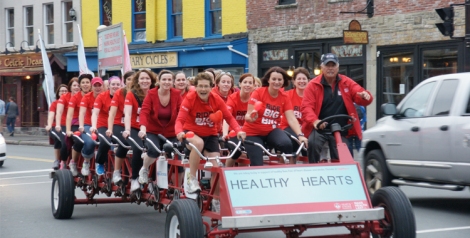 Eastern Health employees take a ride on the big bike to raise money for the Heart and Stroke Foundation.

Four years ago, as an employee of Eastern Health, I decided to organize a fundraiser for our orthopedics physiotherapy team and other health care professionals working at the Health Sciences Centre in St. John’s. The charity that caught my eye was the Big Bike Ride for the Heart and Stroke Foundation. The fact that heart disease and stroke are two of the three leading causes of death in Canada, matched with the awesome opportunity to ride a bike built for 29, made it an easy contender.

In 2009, our first year participating in the fundraiser, we came up with the team name Healthy Heart Throbs. As we were late joining, most employees fundraised the minimal $50 amount needed per person with some raising a little more. That year we had 25 people participate. I encouraged my team to wear red in support of heart and stroke, and this is a tradition that has continued through the years.We kept with it and raised $1,958 in 2010 and $2,560 in 2011. In 2012, the Heart and Stroke Big Bike fundraiser became a little more personal because I started work with the Cardiac/Critical Care Program at Eastern Health. Interest to join our team grew and we increased our fundraising efforts. That year we raised $4,026! 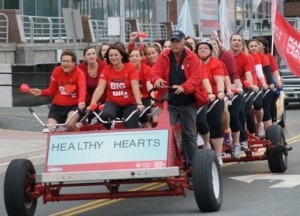 Nancy Murray (front and middle of the big bike), and her collegues on a bicycle built for 29!

We quickly realized that topping the success of the 2012 year would be no easy task! So in 2013, the team got together in the summer so that we could get an early start on our fundraising efforts. Within days of recruiting the team, there was a full bike of 29 employees participating, including my manager and other new employees from the Cardiology department!  We chose a permanent name for our team – Healthy Hearts – and made it our mission to increase our fundraising efforts. 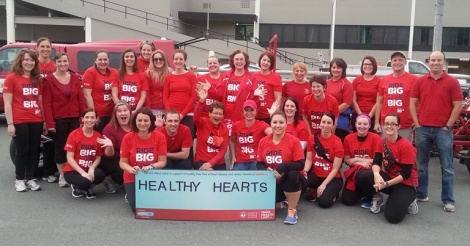 If you are interested in organizing or taking part in the Big Bike Ride in support of the Heart and Stroke Foundation, visit www.bigbike.ca! ■

This story was written by Nancy Murray, a physiotherapy assistant with the Cardiac/Critical Care Program at Eastern Health.