“Thank you for your service.”

With those simple words, General (Ret.) Rick Hillier – former Chief of Defence of the Canadian Armed Forces, both remembered and honoured the former soldiers at the Caribou Memorial Veterans Pavilion in St. John’s.

General Hillier, often referred to as the country’s ‘top soldier,’ made a special visit to the veterans a few days after this year’s official Remembrance Day ceremonies. “I want to say thank you to the men and women here for their incredible service to our nation, and to us,” General Hiller said to a crowd of veterans, family members and staff gathered in the main atrium of the Pavilion. “I try to do my little bit to serve even half as well as they did!” 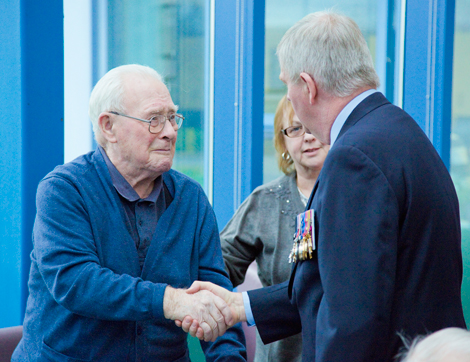 His official remarks were brief; but his one-on-one encounters with the veterans were much longer – and more personal. He spent more than an hour speaking with veterans well enough to come to the public event in the lobby – and with several others upstairs in their rooms.

Now in their 80s and 90s, most of the veterans knew who General Hillier was, and engaged in animated conversation with him.

“He asked me when I joined and how long I served,” said an enthusiastic Alonzo Barry, veteran of the Merchant Marines, and whose memory is still sharp at 95 years and 7 months! “I joined up in May of 1940, spent time in England and Germany and served for five years and 57 days. And yes, I enjoyed meeting him.”

To which the veteran replied, “They call you a soldier’s soldier.” 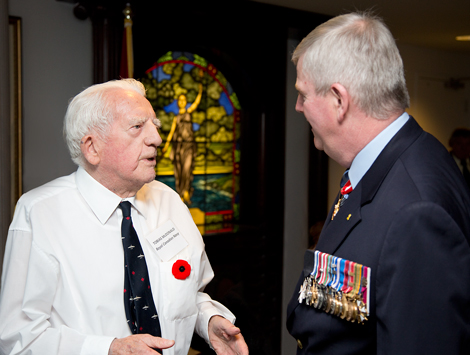 And that’s about the highest praise a military leader can receive. Perhaps that’s why one of the units at the Pavilion was named after Rick Hillier, native of Campbellton, NL…next to Newfoundland soldiers like Tommy Ricketts, and wartime leaders like Winston Churchill and Franklin Roosevelt.

“I’m embarrassed that my name is next to Tommy Ricketts, a member of what’s been called the ‘greatest generation’,” General Hiller said, after visiting the unit. “To have my name mentioned in the same breath as Tommy Ricketts, and Churchill and Roosevelt – I’m incredibly humbled and honoured.

But the reason for this visit was to remember the service of those in past conflicts…to thank them individually and encourage them to speak of their experiences.

One veteran of the Korean War, who has steadfastly refused to speak of his time in Korea, amazed the Pavilion staff when he suddenly began to share freely with Rick Hillier about his experiences.

“The veterans connected with General Hillier, and immediately opened up to him,” said Sharon Nolan, site and resident care manager at the Veteran’s Pavilion. “He was so knowledgeable, and asked such specific and relevant questions about their service.

“One veteran said he was so proud of the General and what he did for the Canadian Armed Forces – to which General Hillier replied: ‘It was a labour of love.’”

One by one, soldier to soldier, they spoke about shared experiences, shared horrors. Some of the elderly veterans struggled to their feet to shake hands, eye to eye.

Comrades in a military world. 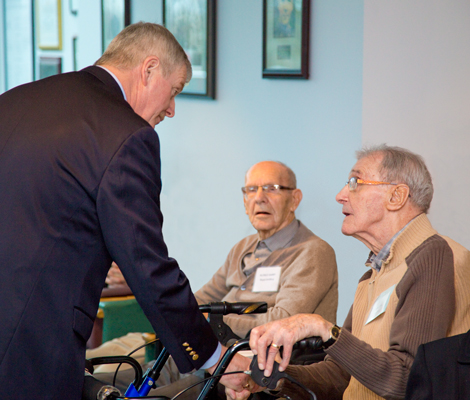 Take Gordon Young of Spaniard’s Bay – age 94. He served in the Royal Navy in World War 2, saw more than his share of action as an ammunition feeder and got wounded in the process.

He says he had a good chat with General Hillier.

“He seemed to know all about me,” Mr. Young marveled. “I really enjoyed it – he knew more about me than I knew myself!”

General Hiller also paid tribute to the Singing Legionnaires, on hand for the occasion, for their contribution to the war effort, and he spoke directly to the Pavilion staff for their care of the veterans on a daily basis. 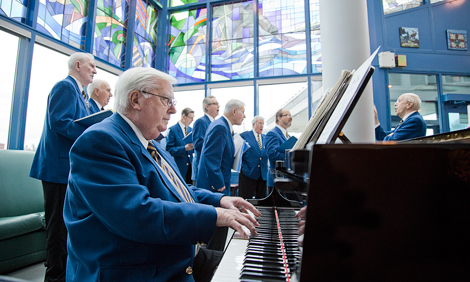 “I want to thank the men and women who work here – from the heart – for their compassion and professionalism,” he said. “You wrap your arms around them…and it’s emotional for those who get a chance to see it.”

As the event closed with the Ode to Newfoundland and a chorus of ‘God Save the Queen,’ one veteran in dress uniform – ever the soldier – got slowly to his feet and held a salute to the last note. 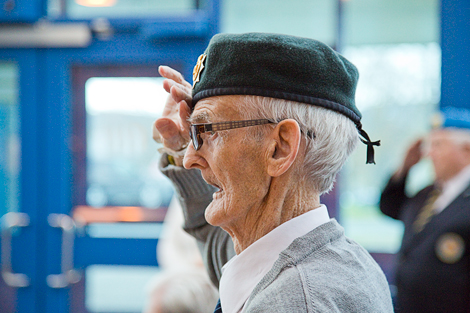 General Hillier’s visit was a simple event that made a big impact, especially on the aging soldiers. It offered recognition, respect and remembrance. It also reflected a powerful message written by another Canadian soldier named John McCrae nearly 100 years ago:

To you from failing hands, we throw the torch –
Be yours to hold it high.
If ye break faith with us who die,
We shall not sleep – through poppies grow in Flanders fields. ■

This story was written by Deborah Collins, a Communications Manager, based in St. John’s.

9 responses to “Remembering our Veterans: A Visit from a ‘Soldier’s Soldier’”