Seventy-eight years. That’s how long Marie and Sandy Duffett have worked at Eastern Health and its legacy organizations. Both nurses, they met while working in the Intensive Care Unit (ICU) at the old General Hospital on Forest Road in St. John’s and married one year later. 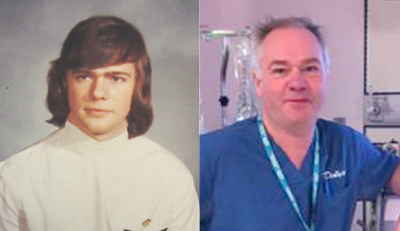 While Sandy works on the dialysis unit at St. Clare’s Mercy Hospital, Marie is a planning specialist within Eastern Health and has worked in a variety of roles throughout her distinguished career: staff nurse, educator, human resource specialist, professional practice consultant and program director.

“I initially wanted to become a teacher,” says Marie, “but I had a close connection with the public health nurse in Harbour Grace and she became a very positive role model for me. And in Grade 10, I worked as a candy-striper at the old Carbonear Hospital. I really enjoyed it and decided to do my RN (registered nurse) at the St. Clare’s Mercy Hospital School of Nursing.” Marie later pursued her education and completed both her Bachelor of Nursing and a Master of Health Studies.

Both Marie and Sandy have seen a lot of changes in nursing through the years. “The biggest change I see is in nursing education,” says Marie. “Specialization has increased which is good since it offers proficiency in certain fields and this can only improve the quality of care for patients,” comments Marie.

Marie and Sandy have two sons. “When Colin and Stephen were young, Sandy and I would often say that the world was going to be a better place because of them,” says Marie proudly. “We always encouraged them to do their best at whatever they chose to do and they didn’t disappoint us. They are kind, considerate, independent, bright young men, both with a great work ethic and we are very proud of them.”

Son Colin is an engineer working in Houston while Stephen has followed his parents into health care and is a fourth year resident in the Cardiology Program at the University of Toronto, having graduated from Memorial’s School of Medicine.

“We are happy for two reasons that Stephen wants to return home when he is finished his cardiology training. One, so the people of our province can benefit from his knowledge and skill and two, so that we can be closer to our precious one-year-old grandson Michael!”

As they approach full retirement, in terms of the future of health care, Marie and Sandy would both like to see positive benefits for the people of the province from Eastern Health’s health promotion efforts in addition to continued collaboration amongst all health care workers.

This story was written by Lisa Browne, Director of Planning with Eastern Health.

5 responses to “The Duffett Nurses: 78 Years of Contribution and Counting”