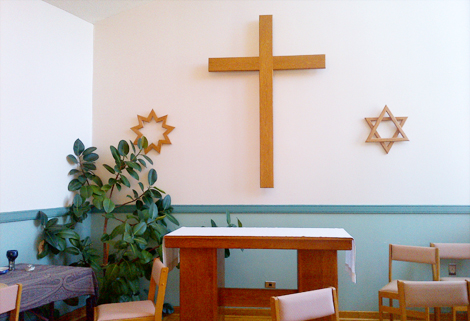 “You can’t give what you don’t have.”

And with those words from Dr. Rick Singleton – Eastern Health’s Regional Director of Pastoral Care and Ethics – a recent session of reflection and renewal for pastoral care workers began at the Waterford Hospital chapel.

Like their clinical counterparts, pastoral workers at Eastern Health give a lot to others every day. They encounter people at their sickest, most vulnerable and often, their most afraid and are privy to many unsettling situations as people deal with difficult diagnoses, treatments and outcomes.

Simultaneously, they are also witness to medical triumphs and moments of great joy.

Pastoral care providers bring a compassionate, calming presence to many patients and residents who are contending with major upheaval in their lives. They are present at the request of individuals who feel the need of spiritual support, prayers, or sometimes just a listening ear. About 60 per cent of people admitted to hospitals request pastoral services, while 99 per cent of those admitted to long-term care facilities do.

In 2012-2013, there were 88,873 pastoral care visits throughout Eastern Health from pastoral care clinicians, managers and faith-based chaplains.

“For me, being adaptable is the key,” says Rev. Jacintha Penney, Eastern Health Manager of Pastoral Care and Ethics. “The most effective pastoral care providers will adjust their approach to the spiritual and emotional needs of those with whom they’re currently interacting.

“Most pastoral care providers working in health care have honed our interpersonal skills so that we are comfortable communicating with a variety of people and situations.” 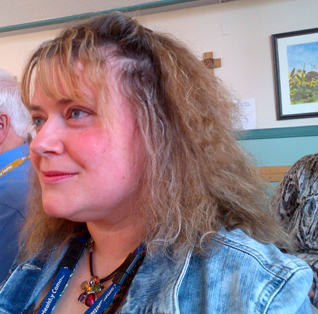 Rev. Jacintha Penney, a manager with Pastoral Care and Ethics at Eastern Health.

So how exactly do you make a positive, meaningful connection with someone you may have never met before – in a clinical setting – often surrounded by other people…and say or do the one thing that will make a difference?

According to Dr. Tom Legere, American author, professor, pastoral counselor, psychotherapist and the special speaker at the session – there’s one thing you don’t do: ‘you don’t characterize people by their problems; because if you see them as ‘problems,’ that’s how you’ll treat them!’

Dr. Legere says in pastoral care you apply what he calls the ‘holy trinity’ of health; you see those you’re called to help as made up of three parts – body, mind and spirit.

He says even in conservative medical circles, some doctors claim that 80 per cent of the ailments they treat have a psychological component.

Dr. Legere says everyone deals with wounds and challenges in their own lives and pastoral care workers are often the most effective – not in spite of their own wounds – but because of them!

Her work complements that of her clinical counterparts; she’s regularly asked for her take on a patient, and physicians will often suggest that a patient would benefit from a visit with her.

She says that many people are simply looking for someone who will listen to them. Sister Betty says she doesn’t preach – and she doesn’t judge:

“And when I leave them, they always say ‘come back again,’ perhaps because I’ve helped to give them peace and acceptance of their struggles, and encouraged them to be patient – and to have hope.”

It can be a battle – literally.

Glen Eagleson is familiar with that analogy. He’s the chaplain or ‘Padre’ at the Canadian Forces Station in St. John’s, and attended Eastern Health’s session.

He counsels soldiers and their families; helps them deal with the big questions around life and death. He says he was intrigued by Dr. Legere’s connection between the psychological and the spiritual, given that he believes that most of the general population has lost sight of the spiritual side of health.

A challenge that’s he feels is probably heightened the military mindset to ‘be strong.’

“So mine is a ministry of presence – to be with them where they’re at,” Glen says. “As they begin to trust me and know I have their welfare in mind, they learn to speak confidentially, and the barriers are broken.”

And some barriers are made of steel and concrete.

Scott Parsons is a United Church Chaplain for the Health Sciences Centre, the Janeway Hospital – and Her Majesty’s Penitentiary.

He says he sees a very clear relation between mind, body and spirit…that a high percentage of those he counsels have a spiritual need. He says for him, pastoral care is relationship with God, with self – and with other people. 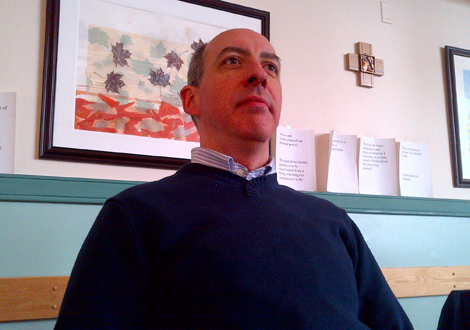 It’s about sitting with people and giving them and their situation meaning. And in an interesting turn for those he sees at the penitentiary – giving them a kind of freedom:

“They are able to express what they can’t express to other inmates: their hopes and fears, which are all a part of spirituality,” Scott adds. “They’re free to show emotion. They often don’t realize what’s on the inside, and that can bring awareness and a release within them.”

Jeff and Tammy Bourne offer support to people trying to break free from another kind of prison – that of drug and alcohol addiction. They are the coordinators of the U-Turn Addiction Drop-in Centre in Carbonear, where men and women battling addiction seek encouragement and support.

They were invited to attend the session at the Waterford Chapel, where Dr. Legere’s description of many pastoral care workers as ‘wounded healers’ struck a chord with them.

Jeff has battled addiction himself and says, in his experience, addiction is clearly an issue that involves the mind, body and spirit. He says sometimes the phrase ‘physically, financially and spiritually bankrupt’ is used to describe a person battling an addiction.

He says admitting his own past struggles helps to open the doors to others seeking help:

“I always say as long as there’s a heartbeat, there’s hope.”

Rev. Dave Guzzwell agrees. A United Church minister who occasionally fills in for the United Church Chaplains at Eastern Health, he was instrumental in bringing in Dr. Legere as guest speaker. He says the presentation reinforced a basic truth for him:

“We don’t have to be ‘perfect’ before we can help others,” he says. “In fact, it can be harmful to separate ourselves from those who we’re trying to help. Hearing from someone like Dr. Tom, who is further down that pastoral care journey, is always helpful.”

In its purest form, he says the message for pastoral care workers and those they help is really quite simple.  “Have courage – and carry on!” ■

This story was written by Deborah Collins, a communications manager with Eastern Health, based in St. John’s.

One response to “Mind, Body and Spirit Connection: Eastern Health’s ‘Other Healers’”