Flowers, trees, birds, open skies…fresh air. A walk or ride with a companion. How important these things are to our well-being!

And that never changes. Long after we’re able to even articulate why they make us feel good – they still do us good.

And that’s the thinking behind a new ‘wandering’ garden at the Caribou Memorial Veterans Pavilion in St. John’s. The Jim Shields Memorial Garden is not only beautiful, but also an extension of the therapeutic services we offer our resident veterans, many of whom have dementia or mobility issues.

Eastern Health officially opened the garden July 11, 2014, in partnership with the Health Care Foundation and the Royal Canadian Legion – and with the support of Veterans Affairs Canada, the provincial government and various other military and veterans associations.

This garden will allow our veterans to enjoy the outdoors, in a secure and safe environment, reflecting Eastern Health’s priority of safe, quality care. It will allow them to navigate their wheelchairs in comfort and plenty of room; to walk sit or with each other, their families or with our staff.

Alice Kennedy, Eastern Health’s Vice President with responsibility for long-term care, says the garden will give our residents safe access to both exercise and therapeutic movement – along with a healthy change of scene. 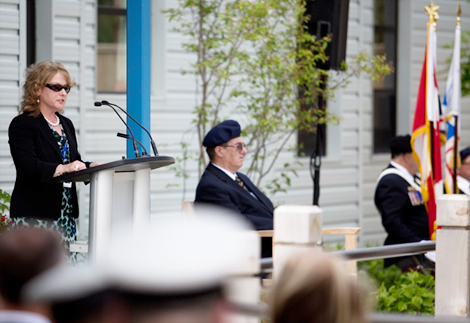 “The evidence shows that calm and serene environments enhance the wellbeing of those with dementia,” Ms. Kennedy added. “Therapeutic gardens also provide sensory stimulation through the sounds of birds, wind in the foliage and water in the fountain – as do the smells of the various plants and visual appeal of the greenery.

“Those who have served us so willingly and so bravely – will in turn be served well by this new garden.”

Fundraising for the garden was spearheaded by the Health Care Foundation, for a total of $365,409.

“We are thrilled with the completion of this project as it has been in the works for some time, and I’d personally like to thank all the supporters of this project, including those who have been so active in fundraisers like the Support Our Troops Ride,” said Debbie Patten, Chair of the Board for the Health Care Foundation. “This space will enhance the environment for those living with dementia-type conditions at the pavilion, as well as their families.”

The Legion Action Committee at the Caribou Pavilion has been very active in raising funds for the completion of the garden. Ross Petten, President of the Royal Canadian Legion, Provincial Command, said it’s fitting that the garden be named for Mr. Shields.

“Jim Shields was a navy veteran himself, a long time Legion member and a strong advocate for veteran programs and services, particularly those at the Caribou Memorial Veterans Pavilion,” Mr. Petten added. “On behalf of the Royal Canadian Legion and its 46 branches throughout the province, we owe a debt of gratitude to both Mr. Shields and to all those involved in bringing this garden to fruition.” 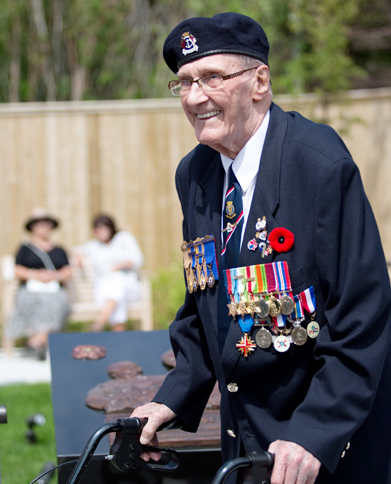 Gordon Young remembers Jim Shields very well. The 95-year-old navy veteran and resident of the Pavilion helped to unveil the obelisk in the garden commemorating Mr. Shields. He says Jim was well deserving of the honour.
“He was fine man, a very agreeable man and I liked him,” Mr. Young added. “He did a lot for people and this garden is a beautiful idea – a great place to go.”

Fellow veteran and resident Alonzo Barry agrees. “I have been looking out at this garden for so long, waiting for it to open!” the 96-year old said enthusiastically. “I remember Jim Shields as a sweet man, and this is a good way to keep remembering him.” 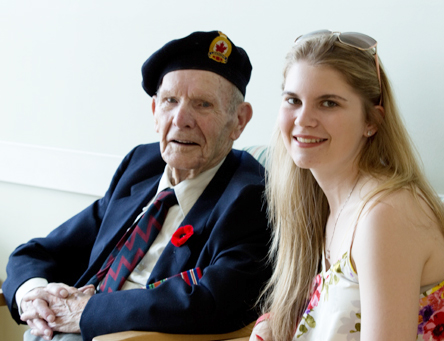 The navy veteran from World War II was also a founding member of both the Royal Naval Association and Branch 56 of the Royal Canadian Legion. Although Jim Shields was never a resident of the Pavilion, he was a very familiar face – and a great supporter of all the veterans who lived here.

He visited often – and regularly arranged for the buses to bring our veterans to the Remembrance Day ceremonies and other events.

He gave his time freely and with no thought of reward for 60 years after his own navy service, according to his grandson and namesake Jim Meaney, who spoke on behalf of the Shields family at the official opening. 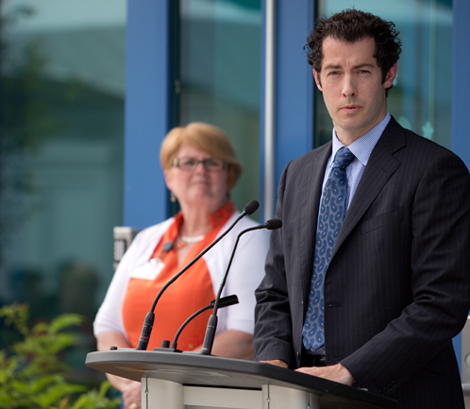 “He felt he was simply doing his duty and the creed that he lived by was ‘we will remember them, they will not be forgotten,’” Mr. Meaney added. “My grandfather spent much of his time helping others, and he applied the same passion and care with his family and instilled these values in all of us.

“For this reason we take great pride in the fact that his humanitarian efforts, his belief that the war effort of every man made a difference – and his relentless spirit that no man would be forgotten – is being recognized.”

Clearly, Jim Shields understood the importance of recognition and remembrance in the lives of veterans. It’s fitting this garden stands today as a legacy to his loyalty in standing by his comrades – a legacy that still lends them support and comfort – and literally ‘breathes new life’ into their surroundings.

Although the garden is complete, donations may still be made for ongoing maintenance, additional shrubbery and a monument which will be placed at the entrance of the garden. Donations can be made by phoning (709) 777-5901. ■

This story was written by Deborah Collins, a communications manager with Eastern Health.