It’s easy to take for granted something we involuntarily do thousands of times a day. I’m talking about breathing— the vital act of inhaling and exhaling air that keeps us healthy, alert and, most importantly, alive.

As a smoker, Sean Mandville compromised this effortless action. However, after 30 years of smoking his appreciation of a simple breath began to change and he realized enough was enough. Sean reached a point in his life where it was time to make a change.

“I was feeling miserable. I could barely manage to catch a good breath,” said Sean. “Not only did I want to quit, I needed to quit.”

As a domestic worker with Eastern Health for 20 years, Sean began his journey to become a non-smoker by contacting Eastern Health’s Employee and Family Assistance Program (EFAP). With their help, Sean was provided with the information and assistance necessary to get on the path to a healthier lifestyle.

“They also connected me with the Smokers’ Helpline,” said Sean. “Though a non-nicotine prescription medicine was the method I chose to best assist me, Eastern Health helped me with my first step to get to where I wanted to be.”

Sean admits that his journey to kick the habit was no easy task. Quitting was a hard fought battle, which he had lost at least four times in earlier years. Though he had not succeeded to quit in the past, this time was different. It had to be, as Sean began to see a decline in his health. 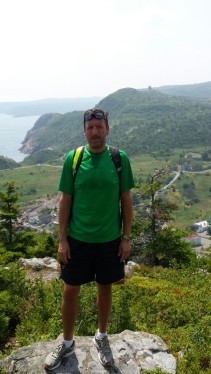 Sean enjoying the beautiful Newfoundland scenery on his hike in late July 2014.

“I finally realized it was time to make a change,” said Sean.

And that’s exactly what he did. In May of 2013, Sean Mandville smoked his last cigarette.

“The combination of focus and positive thinking keeps me motivated,” said Sean. “I enjoy being active — things like hiking, walking the lake. I love exercising outdoors; it’s one of my favorite ways to stay healthy!”

“In the end, quitting smoking was my first step to a new, healthier chapter of my life.” ■

Eastern Health is proud to be smoke-free! If you are interested in accessing services to help you quit smoking, please contact the Smokers’ Helpline or Eastern Health’s Employee and Family Assistance Program. Eastern Health offers numerous supports for employees, including a comprehensive smoking cessation program, subsidized Nicotine Replacement Therapy, subsidized prescription medication reimbursement and referrals for supportive counseling. Together we can, be smoke-free!

This story was written by Samantha Flynn, a co-operative education student with Eastern Health.

4 responses to “The Appreciation of a Simple Breath”