“Every dollar makes a difference” – this is especially the case in health care and we are lucky to have so many donors at the Health Care Foundation (HCF) that realize this.

One donor group who understands this very well is the Building Trades Workers of the Resource Development Trades Council (RDTC). Through a fund created within the Hebron project, the RDTC and 16 building trades unions have committed $0.50 for every hour worked and $1 for every overtime hour worked by every unionized employee involved with the project.

The result – a multimillion dollar commitment to surgical care at the Health Sciences Centre and St. Clare’s Mercy Hospital, with over four million already donated to the cause! This money is being used to replace medical equipment and technology in 17 traditional operating suites, transforming them into Integrated Operating Suites. To date, two suites have been completed.

The Integrated Operating Suites will improve quality and safety, as well as facilitate better outcomes for our patients, thanks to features such as high definition visualization, advanced medical equipment and videoconferencing. But don’t just take my word for it, see what physicians who work in the new suites, as well as President and CEO David Diamond have to say about them in the below thank you video to the Building Trades Workers of the RDTC.

Last Wednesday, March 4, 2015, the Health Care Foundation, in partnership with Eastern Health, held a very special event to name its new Integrated Operating Suites in recognition of the support from the Building Trades Workers of the RDTC. The event was a great success, with a number of members from the RDTC and 16 trades unions in attendance. We also had a number of other special guests, including the Honourable Steve Kent, deputy premier and minister of Health and Community Services, David Diamond, president and CEO of Eastern Health, HCF board members and employees from both the Health Care Foundation and Eastern Health.

The biggest highlight of the event was when members of the RDTC and 16 unions were given the opportunity to tour one of the new Integrated Operating Suites. To do so, all of the tour participants had to “scrub up” and put on their “greens.”

Tour participants getting dressed to enter the new operating suites

Once they were suited up, three employees of Eastern Health’s Perioperative Program took them on a tour of the new operating suites: Debbie Walsh, director, Jennifer Long, division manager, and Joanne Peddle, program coordinator.

Members of the unions and RDTC in the Integrated Operating Suites

“The response to the tour was overwhelming,” said Debbie Walsh. “The donors were provided with a hands-on experience that provided them with a very real understanding of how the new Integrated Operating Suites benefit our patients every single day. We also took them into nurse’s lounge so they could hear firsthand from staff the positive impact these new suites have had on surgical care in this province.”

“To experience such an intangible moment that provided a connection between the donor and the provision of care within Eastern Health was truly unforgettable,” added Debbie.

Elizabeth Harding, who has worked with the Building Trades Workers of RDTC and Newfoundland and Labrador Building and Construction Trades Council (NLBTC) for just under 20 years, shared Debbie’s sentiment. 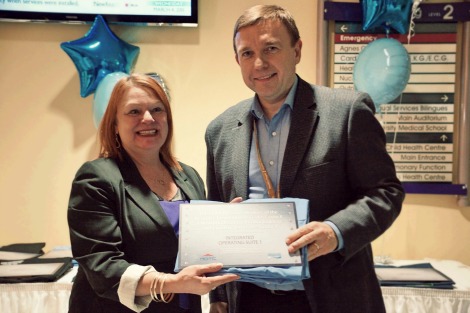 “Operating rooms have always been a scary place for me; especially now that my senior years are approaching, as I just recently turned 60,” said Elizabeth. “It was very comforting to see all the modern technological advancements that have been made and it also gave me a tremendous sense of pride to see the results of the overwhelming generosity of our Building Trades Workers…money well spent!”

“I now have a new found confidence that these upgraded operating rooms are better prepared to meet the needs of our aging population and will, indeed, help us live longer and healthier lives,” added Elizabeth.

We thank the Building Trades Workers of the RDTC for their significant investment into health care in this province. These state-of-the-art Integrated Operating Suites will make a direct and significant difference in the lives of thousands of patient’s in this province – our husbands, wives, daughters, friends and loved ones. No words can thank you enough for that gift.■

This story was written by Jackie O’Brien, manager of communications and stewardship at the Health Care Foundation.