There is a special connection between people and their animals.

Anyone with a dog knows that a dog’s love is unconditional and the relationships we foster with them can be the strongest we experience.

But sometimes, we as pet owners, have to part with our beloved animals due to circumstances that impact on our health, such as going to the hospital or moving to a long-term care facility.

That’s why in 2005, Lynn Cooze, an assistant professor and nursing instructor at the Memorial School of Nursing submitted a proposal to bring the St. John Ambulance Therapy Dog Program to visit children while they’re in hospital.

The Therapy Dog Program started at the Janeway Health and Rehabilitation Centre the following year – and furry friends have shown up every Thursday evening ever since!

Some of the therapy dogs!

“By touching, feeling, and cuddling with these kind therapy dogs, children get both comfort and companionship when it’s needed most,” said Trixie Mahoney, recreation therapist with the Child Life Program at Eastern Health. 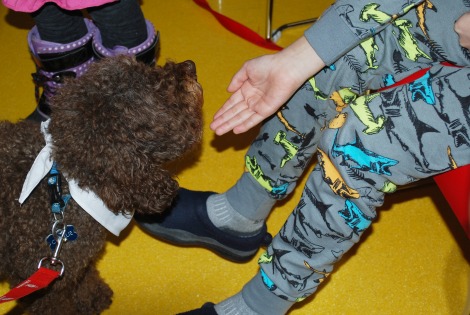 We decided to drop in on one of those Thursday visits and there was a great turn out in the children’s playroom with three dogs, Charlie, Maggie and Abbey along with a crowd of children!

As soon as the dogs showed up, you could see the excitement in the children’s faces and for a full hour, they were able to pet, play and feed the dogs treats.

“I like to play with dogs a lot,” said Daelen. “I like to see the dogs, give them some treats and pet them.” Although, Maggie’s owner joked that she gets so many treats, she probably needs to lose five pounds!

The group of St. John Ambulance volunteers and their dogs made the night fun for all the kids involved, making sure each one got some one-on-one time with the dogs. A lot of them like Daelen Murphy, didn’t want to leave the playroom!

“It’s the first time I got him out of his room since we arrived on Saturday!” said Daelen’s mom, Lori Murphy.

The dogs encourage a lot of sick children to have some fun with four-legged friends – at a time in their lives when fun is really important.

All three of the dogs wanted to interact with the kids which really lifted the spirits of everyone in the room.

And that’s true, whether you’re a child at the Janeway or a senior at a long-term care facility, like the Caribou Memorial Veterans Pavilion in St. John’s.

A few years ago, Angela Moyse, a social worker at the Pavilion in St. John’s brought the Therapy Dog Program to the residents.

“I knew the moment the residents laid eyes on the dogs that it was worth the effort!” Angela said: “The way their faces lit up – and the mutual affection between the men, women and dogs was very special to see.

“Having the dogs visit allows residents to connect with happy memories of the past, to socialize with others the share a common interest, and to meet new people.”

During a recent visit to the Pavilion, St. John Ambulance sent five volunteers with their dogs, Ebony, Abby, Missy, Tito and Brise to extend their paws to residents like 94-year-old Gerald Greenslade. He fought in World War II and was the first Mayor of CBS but at the sight of the dogs, he became like a kid again!

“I just love when the dogs come!” Gerald said.

During the visit, all five dogs came into Gerald’s room. It got a little crowded with each of the dogs completing for some time with him. Gerald even got some kisses from Ebony! 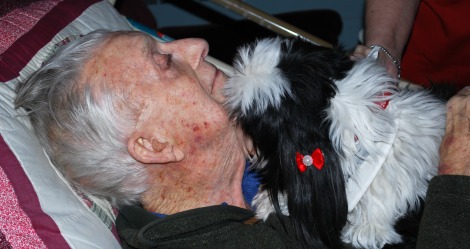 Gerald Greenslade getting kisses from Ebony

For Gerald, the most important thing is just having the dogs there. “From the time I was a little boy, I can always remember having a dog in the house,” he said. “So when the dogs come in, it’s like I’m at home.”

Angela Moyse has summed up the Therapy Dog Program like this: “It allows residents the time to touch, stroke and feel the animal, which has been proven to decrease stress and allow people to connect with positive feelings.

Gerald with Brise enjoying the company!

In addition to the Janeway and the Pavilion, The Therapy Dog Program also visits:

For more information on how you can volunteer with the St. John Ambulance Therapy Dog Program click here.

6 responses to “Canine Therapy – A Warm and Fuzzy Feeling!”