“I’m lucky,” Theresa Shea, a recovered stroke patient says with a big smile. “I’m lucky to be here, to be talking to you and to be alive.”

Theresa suffered a hemorrhagic stroke 18 months ago that paralyzed the left-side of her body. The stroke came a few days after she experienced a brain aneurysm. “I was gardening and all of a sudden, I just dropped,” Theresa says.

Her neighbour found her and immediately called for help.

“I had never been sick a day in my life!” Theresa recalls. “And I was lucky to be outdoors,” she adds, noting that her son, the youngest of three and who lived with her at the time, was on a trip and not due back for few days.

Much of what happened next was a blur.

Theresa underwent surgery at the Health Science Centre shortly after being admitted to hospital. The surgery was successful, but a few days later, Theresa could not speak. “I realized something was wrong when I couldn’t move,” she says.

Theresa spent the next three weeks at the Health Science Centre, and was later transferred to the Dr. Leonard A. Miller Centre where she spent an additional two months with Eastern Health’s rehabilitation team.

“It took two nurses to get me out of bed,” Theresa recalls. “I had trouble swallowing, and for the first month all my food was pureed.

“I remember a lady in the bed next to me when I first arrived at the Miller Centre. She could sit down and eat on her own. She assured me that I too would get better. ‘It takes time, but you’ll get there,’ she said.”

That reassurance was most welcomed, and it helped Theresa to remain positive. She recounts how, with her left leg hanging heavily by the side of her bed, she was determined to get better.

A path to recovery

With the assistance and constant support of the rehabilitation team, Theresa slowly recovered some of her abilities. Tasks that were mundane suddenly became gigantic and exhausting. The sole chore of getting cleaned up in the morning was like running a marathon. “I often had sweat pouring out of me just by getting dressed and washed with just one hand!” Theresa exclaims.

Then a series of milestones took place.

“There was a nice fellow there, Grant, a physiotherapist, who pushed my limits!” Theresa remembers fondly. “At first he’d hold my weight and then he’d let go. And after weeks of rehab I finally managed to stand up on my own!”

That was a turning point towards recovery. “It gave me a lot of hope,” Theresa says.

“It was amazing that I could stand up! Once I did, my goal became to walk out of the Miller Centre.”

Then, Theresa was able to eat a soft biscuit – a jam-jam – leading to minced and then to solid foods, helping her to regain strength faster.

But the real test came when it was time to walk.

“I kept at it, standing up when I could. At first, I had a belt tied around me with Grant close behind. With great effort, I took a small step one day and I just kept going until, I don’t know, I’ve done really well,” she says.

“There was no stopping me once I knew I could walk!”

The effects of stroke vary depending on where the brain is injured, and Theresa recognizes how fortunate she is to be able to walk again.

“The goal of our program is to assist people disabled by injury or disease to reach and maintain their best possible quality of life,” says Mary Rogers, a physiotherapist with the Rehabilitation and Continuing Care Program at Eastern Health. 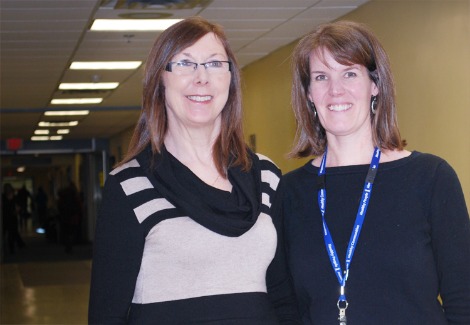 Mary was part of the integrated team that worked with Theresa during her rehabilitation.

“Theresa never gave up,” says Mary. “She had a great attitude and was willing to try every suggestion.”

Theresa looked forward to her exercise routines, the treadmill in particular. In her mind, these helped to get her stronger and closer to home.

Staff at the Miller Centre offered their support in every way possible so Theresa could go out into the world again.

“I was so nervous!” Theresa says.

“Paul, a member of the recreation therapy team, took me out to lunch one day just so I could get used to being in public again. On another occasion, he took a few of us to watch a movie at the theatre.

“I was also worried of walking down hills and loosing balance – that was until Mary invited me for a walk down a hill – and I did it!”

“I was walking everywhere once I knew I could do it,” Theresa says.

Theresa’s family was also an integral and active part towards her recovery. “They were there for me and provided lots of support and comfort,” she says.

All these things really helped Theresa reclaim her self-confidence.

“I realized that I was ready, that I could have an independent and fulfilling life again,” Theresa says. 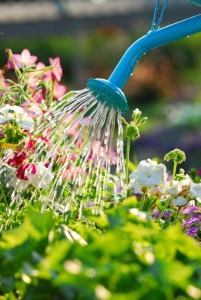 After eight weeks at the Miller Centre, Theresa went on to live with one of her sons and his family. She attended Eastern Health’s Rehabilitation Day Hospital for the next 12 weeks, and eventually moved to her own place.

Although her left hand hasn’t yet reached full mobility, that hasn’t deterred Theresa from going about her life. She’s even renewed her driving license!

It is important for those who are going through similar fates to know that it is possible to live with stroke. “I often visit with patients when I go to the Miller Centre. I share my own experience hoping that it provides encouragement,” Theresa says.

“I wouldn’t be where I am today without the people at Miller Centre. The rehabilitation team was a great support and a lifeline. I am ever so grateful that with their help I’ve made it this far!

“And I can’t wait for summer, my garden awaits!” ■

This story was written by Melisa Valverde, digital communications manager with Eastern Health.

22 responses to “Journey to Recovery: A Small Step at a Time”