Within earshot of the starting pistol at the Royal St. John’s Regatta sits the Caribou Memorial Veterans Pavilion on Forest Rd. Home to veterans of the first and second world wars – and the Korean conflict, its residents have seen their share of history – and regattas!

For years, staff escorted the veterans down the hill to Quidi Vidi Lake to take part in the big event. But in the past two years, a combination of advancing age – and uncertain weather has meant the veterans were no longer able to make their annual trek lakeside.

So last summer, 91-year-old Frank Sainsbury, a veteran of the Merchant Marines, and a great fan of the Regatta, decided there was no reason the veterans should miss out on the celebrations – and suggested if the veterans couldn’t go the Regatta – then the Regatta should go to them!

With the help of his family, the Pavilion staff and volunteers, the Frank Sainsbury Regatta Day Garden Party was born – to great reviews.

Gloria Sainsbury is Frank’s daughter. She says she grew up on the Battery in St. John’s – and the Regatta was big with the whole family – especially her father:

“He went to the Regatta whenever he could, and when he attended the Pavilion’s Regatta Garden Party last August, he was overwhelmed to see how happy the veterans were,” Gloria added. “He was all about making everyone else happy!”

Frank Sainsbury passed away six months later, in December of 2014.

But the Frank Sainsbury Regatta Garden Party had taken hold. This year, it drew an even bigger crowd of veterans, patients from the Miller Centre next door, family, friends, Eastern Health employees and volunteers.

The garden party is very Regatta-like….with concession booths, games of chance, a barbecue, live entertainment and impromptu dances! The RNC mounted patrol trotted by for a visit – and a fleet of antique cars brought back a flood of another kind of memories for the older folks present. 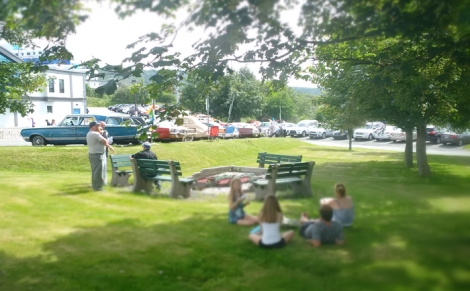 The grounds of the Caribou Memorial Veterans Pavilion

Tracey Howlett is a recreation therapist at the Pavilion – and a key organizer of the garden party. She says the pavilion is like a community of its own – and this event has a lot of support – and a lot of benefits:

“It brings back a lot of memories of the Regatta for the residents, especially those who can’t get out anymore,” she adds. “The Regatta Garden Party is very important socially; it means getting out of the Pavilion after all winter, with families and other people stopping by to say hello.

‘This one is even bigger than last year’s – I think Mr. Sainsbury is looking out for us!”

Dawn Haines, the Resident Care and Site Manager of the Caribou Memorial Veterans Pavilion, feels the residents deserve no less than this kind of special attention:

“We at the Caribou Memorial Veterans Pavilion value and respect the men and women who reside with us and who have sacrificed so much so that we can live, love, and enjoy our great country,” she adds. “The day will be remembered fondly by all those attended and we are thankful to family members of our Veterans, and all of our staff and volunteers who helped turn our event into a huge success.” 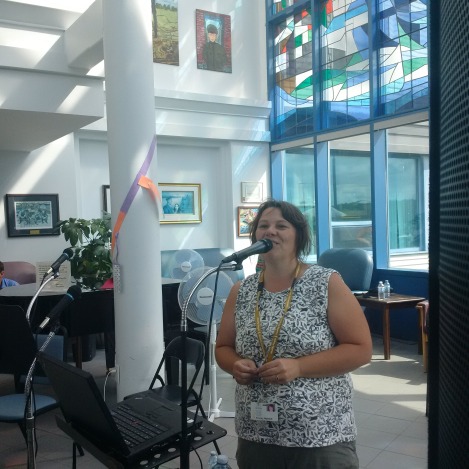 Among those in attendance this year – a large group of Frank Sainsbury’s family…children, grand-children and great grand-children.

Seven year-old Zachery Sparkes is a great grandson. While he took aim at a basketball hoop, his family reflected on what Frank was aiming for with his ‘Regatta spin-off.’

“I think this is very fitting; he loved the Regatta and this symbolizes him and the type of person he was,” says Zachery’s mother Maegan Sparkes. “I’m really into tradition, and we’ve made this a family tradition. Though it’s sad not to have him here, it’s a great way for us to remember him – both now and into the future.”

And the veterans themselves?

Ken Davis is a 93 year-old veteran of the Second World War, who really enjoyed the garden party, as it reminded him of regattas of years gone by. “The regatta was a time to get together and meet up with people that you haven’t seen in a long time,” he said. “The best part of the Caribou Pavilion party was the visit from the St. Johns ambulance therapy dogs and the RNC horses – and to meet everyone from the pavilion – outside.”

Gloria Sainsbury believes that would make her father very happy – something he has passed on to his family.

“I love seeing people happy – this is a great morale booster for veterans, their families and the staff,” she adds. “It keeps my father’s memory alive for our family, as he was about making everyone happy.

‘We’re all saying that his presence was with us today – and if he was here, I believe he’d say, “What a great job!’” ■

This story was written by Deborah Collins, a communications manager with Eastern Health, based in St. John’s.

One response to “‘Home’ for the Regatta! A Pavilion Party”