Ivy Barfett is a patient who beat the odds, with the help of Code Stroke, after she suffered a massive stroke. Her story demonstrates how important it is to understand that a stroke can happen, anytime, anywhere to anybody.

It was an ordinary day and Ivy Barfett had just returned home from the post-office. While standing in the kitchen having a conversation with her husband, Wesley, she suddenly could not finish her sentence.

“It was like I had a mouth of marbles,” she says.

Wesley noticed that the right side of Ivy’s face was drooping and immediately knew something was wrong. He brought her directly to the emergency department at Dr. G.B. Cross Memorial Hospital in Clarenville.

“My symptoms came on so fast that he had to help me to the car and lift my legs in for me because I couldn’t do it myself,” said Ivy. “I put my left hand on my right, and I couldn’t feel it!” 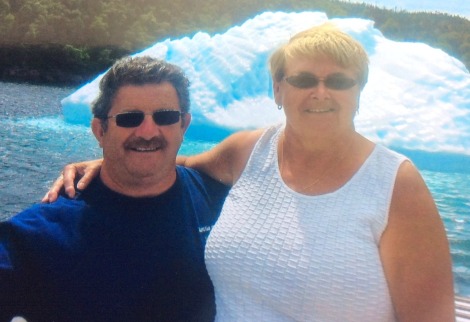 At the hospital, the ER team activated their Code Stroke protocol, part of which was to order an immediate emergency CT scan. They quickly confirmed that Ivy was having a massive ischemic stroke, caused by a blood clot in a vessel in the brain. Luckily she was a candidate for a potentially lifesaving stroke treatment called Tissue Plasminogen Activator or tPA.

“The trick is, tPA has to be given to eligible patients within in a specific time period,” explains Dr. Etienne van der Linde, Site Chief of Emergency at the Dr. G.B. Cross Memorial Hospital. “There is a window of 4.5 hours from the first onset of symptoms to qualify – which includes the 60 minutes it takes from the point of entering the hospital, determining patient eligibility and to preparing and administering tPA.”

The drug takes action within minutes of being given to a patient – functioning to dissolve the clot. In some cases, this medication can actually reduce the severity, or even reverse the effects of a stroke such as Ivy’s.

Code Stroke was officially implemented by Eastern Health in the fall of 2015 to put a standard stroke protocol in place.

The purpose of Code Stroke is to move the patient through the stages of stroke assessment smoothly and quickly and to reduce the rate of death and disability related to stroke.

In a case of suspected stroke, paramedics will take patients directly to one of these sites – which is why it’s so crucial to call 911 for assistance, and at the first sign of symptoms.

Dr. Van der Linde is a dedicated champion of Code Stroke. “It is truly a team effort,” he says, “and involves the contribution and collaboration of health-care professionals ranging from paramedics to nurses and physicians, to radiologists, radiographers, lab, and everyone in between.”

Code Stroke Team at the Dr. G. B. Cross Memorial Hospital in Clarenville

His team modeled the program to fit their facility, and then audited the results.

During a six-month audit, they discovered that they administered tPA only 25 per cent of the time. The remaining 75 per cent of patients arrived at the hospital too late to be candidates for tPA.

“Stroke is just as big of an emergency as a heart attack!” stresses Dr. van der Linde. “When you’re experiencing stroke symptoms every minute counts, literally millions of brain cells are dying irreversibly. tPA has the potential to make the difference not only between life and death, but a lifetime of disability.

And it was Ivy’s case that sold him on the full potential value of the drug.

“She went from full paralysis on her right side to normal function, less than three hours after suffering from a massive stroke,” he said. “It was the most impressive case I’ve seen.”

Ivy had no warning signs and credits her survival to her husband and his familiarity with stroke symptoms. Wesley’s quick thinking enabled Ivy to receive tPA only 55 minutes after her first symptoms, and 45 minutes after her arrival at the Hospital.

“If I had been alone, I probably would’ve laid down, and waited for the symptoms to pass,” she says. “I’m so glad it turned out the way it did. Even the staff who cared for me were amazed with my recovery, some of them crying and hugging me.”

Code Stroke has proven its effectiveness, but Dr. Van der Linde advises that the best way to treat a stroke, is to not have one in the first place. Living a healthy lifestyle, consisting of physical activity, proper healthy eating habits, and not smoking is the best way prevent a stroke.

It is also as important to know how to identify a stroke. June is Stroke Awareness Month – do your part and learn the signs and know what to do. For more information, please visit: Heart & Stroke Foundation ■

This story was written by Cassie Pilon, a public relations co-op student with Eastern Health in St. John’s.