March and April of 2017 were busy months for Mark Nichols. Busy and productive. The longtime curler, a member of Team Gushue, was tied up with a couple of ‘little events’ known as the Canadian Men’s Brier and the World Men’s Curling Championship.

Both of which his team happened to win!

But while Mark was busy fulfilling those professional dreams on the ice, another was happening on the home front, as he and his wife, Colette, prepared to welcome their second child into the world. He says he became very good at ‘compartment-alizing’ – particularly at the World Championship, which was held in Edmonton…and took place just days before Colette gave birth.

“During the World Games, there really wasn’t a moment I wasn’t thinking about Colette and the baby – but when you step on the ice, you disconnect from the external,” Mark says. “You park it for two and half hours, and afterwards, you get to think and worry again!”

And Colette understands the curling world. She’s a big fan of the game – and her husband.

“I understand what my role is, and when Mark’s gone and on the ice, he’s doing his job which is important to our family,” she added. “If there are things happening at home, well, they can wait for a while. I’ve been ‘chasing a Brier’ too for 13 years, since we’ve been together – and I do what I can to help him succeed.”

Curling is a family affair. So there was no question Colette, and their older son Beckett, would be rink side during the Brier in March, especially as it was held on home turf in St. John’s. Under the public spotlight of Team Gushue, it was well known that Colette’s due date was close – and the frenzied excitement of the games worried a few fans:

“We had a number of people say ‘why is Colette jumping up and down like that’ – though she probably didn’t even remember doing it, being caught up in the moment,” Mark said, smiling.

“On our Facebook page, people were asking, ‘when’s the baby coming?’ and they were all concerned that I wouldn’t be home in time. When we posted that our baby boy Emmett had arrived and he and Mom were doing well, it went viral – literally hundreds of thousands of responses. It meant a lot to us!”

But the weeks and months leading up to that happy, high-profile day were not without challenges. Colette’s was considered a high-risk’ pregnancy, which meant she had to be closely watched. Every Friday, she had an appointment at Eastern Health’s Maternal Fetal Assessment Unit, where staff kept a close eye on her and the baby.

“They knew our situation, and these ladies know high-risk pregnancies; they were great,” said Colette. “They were reassuring and kind, and no matter how many questions I asked – they were very patient.”

Beverley Murphy is one of the specialized nurses at the fetal assessment unit, with 30 years of nursing experience. She saw Colette for most of her appointments, and says she and her colleagues know what to look for – and can answer questions for expectant mothers during all the stages of pregnancy. She says women in high-risk situations face a lot of uncertainty, and counseling and support are vitally important.

“One of the most important parts of our job is to be reassuring during a stressful time,” Beverley added. “Most people expect a normal pregnancy, and when that doesn’t happen, we try to make it feel as normal as possible, as all stress – and no enjoyment – makes it harder. Humour helps, too!”

With that in mind, Beverley decided to have a bit of fun with the regular ultrasounds. As Mark was unable to attend many of the appointments, she included him in the process, with little messages on the ultrasound pictures. Messages related to curling – given the curling championship season was in full swing!

Baby’s ultrasound – with a personalized message to daddy, Mark Nichols.

Messages like ‘Hurry hard!’ and ‘Go, Daddy, Go!’ found their way onto the ultrasound images of the baby – and kept Mark connected to what was happening when he couldn’t be there in person.

“My husband and kids are curlers – we all curl, so I had great conversations with Colette,” Beverley says. “I add personal messages on ultrasounds for a lot of patients – their husbands and the baby’s siblings. People appreciate that little connection – and dads are a bit more on the sidelines – so it’s nice to do something for them. And you never know – there could have been another Olympic curler in there!”

But Beverley says she always reminds the partners that the expectant mother is “growing a human being in there. That makes her a rock star – and you need to treat her like one!”

Colette was grateful for the care of her physicians, as well – Drs. Erica Fowler and Kat Zefkic – who she says were kind, funny and went above the call of duty. With a laugh, she says during the delivery process, the resident doctor wasn’t a curling fan – so she got all the attention!
But as Father’s Day draws near, she reflects on Mark as a father, the loss of her own father five years ago – and how important fatherhood is.

“As the mother of two boys, I want them to mimic Mark,” she says. “He is patient and kind, strong and dedicated, and I want the same for our boys. Both Mark and his dad have become very important to me.”

“My dad was such an influence on my life, and taught me to be a great friend, to be responsible and to work hard and be good at what you do,” Mark says. “If I can teach my kids this, I’ll be happy.” 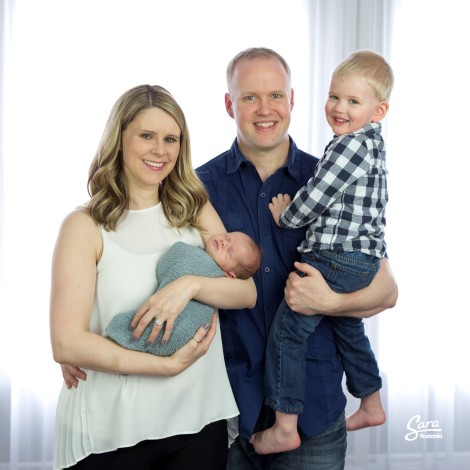 Mark says their older boy Beckett is already a sports fan, and enjoys curling – yelling ‘go, Daddy go’ – and proclaiming to his daycare class that ‘my Daddy’s a world champ!’”

As Father’s Day approaches, in the wake of an incredibly exciting year, Mark doesn’t hesitate when asked to describe the very best part of it.

“My family means everything to me,” he says. “The Brier and World Championship were the top of my curling career – but it can’t compare to birth of a child. We’re blessed to be parents of two healthy boys. I’m blessed to be a Dad every day – and every day I’m home is Father’s Day!”

This story was written by Deborah Collins, a communications manager with Eastern Health.

4 responses to “The Brier Baby: A Father Strikes Gold”