I recently attended an event called the Celebration of Courage. Hosted by the Organ Procurement & Exchange of Newfoundland and Labrador (OPEN), it’s a ceremony that recognizes the generosity of individuals and families who have donated the organs of their loved ones, so that others may have another chance at life.

As I looked around the room, I could see people from all walks of life; families, children, grandparents, friends. The air was rich with sorrow and something more – people smiled through their tears, embraced each other, or just sat quietly.

I felt somewhat apart, but welcome at the same time. We all experience loss, but organ donation is a conscious decision. How many of us have the strength in that most dire situation, to choose to make the life of their loved one more meaningful by giving the gift of life to others?

These people shared a bond – forged in loss – but tempered in altruism. And the thread that pulled these otherwise disparate strangers together, was the staff of the organ donor program.

“We’re the link to their family member,” says Kim Parsons, nurse coordinator. “We’re very connected. We talk to families at such a vulnerable time in their lives, that you can’t help but form a connection. We carry their stories for the rest of our lives.”

Edna Cahill, whose son Matthew received a double lung transplant 10 years ago, and Crystal Prowse who received a heart 30 years ago, shared their stories of thanks with those in the room. Their stories have also been featured in previous editions of Eastern Health’s StoryLine blog and it was a great opportunity for me to reconnect with them after the ceremony.

Interestingly, both women are Respiratory Therapists; Crystal as a result of her experience, and Edna in an ironic coincidence, given that her son Matthew was born with Cystic Fibrosis (CF).

Much has changed since Matthew received his transplant. December 16 marks the day 10 years ago he came home with his new lungs. He’s married now – and his wife just gave birth to twins.

“I always feel a bit guilty when I share stories about Matthew’s life with families of organ donors,” Edna said. “We’re so happy, and I wonder if the donor’s family feel that he’s living the life that their loved one should have had.”

Feelings of guilt on the part of the recipients are not uncommon, Kim says. But the feedback she gets from donor families is quite the opposite – they want their sacrifice to mean something. They want the life their loved one lost, to enable someone else to live.

In fact, while Crystal and I chatted after the ceremony, a donor family approached her and thanked her for her words. “Thanks so much for sharing your story,” the lady said. “It was comforting.”

The Gift of Acceptance

Organ rejection is the biggest physical risk recipient’s face, so it’s really important that they accept the organ as their own.

Edna says her son Matthew realized that fact from the very beginning. “Just after his transplant he looked at me and said, you know, mom, if I want to keep these lungs, I can’t think of them as belonging to someone else. They gave them to me and I’ve got to treat them like they’re mine. And I owe it to the donor to live the best possible life I can with them.”

Just a year after his transplant, Matthew moved to Toronto for the summer and took a job with the Cystic Fibrosis Foundation. Edna and her husband flew up to visit and while they were there, got to watch their son take part in an ultimate Frisbee contest. “I sat in the stands and cried like a fool because for the first time in a lot of years, Matthew was out running and laughing. And he could keep up. He hadn’t been able to do that since he was a little boy. Unless you’ve been through the transplant journey, there are no words to help you understand. The fear. The hope. All that lives side by side. Watching him that day – it was the first time it really hit me that his life was going to be so different because of this.”

Crystal Prowse has also come a long way from the child she was in 1988. “I didn’t realize the magnitude of the gift,” she said. “I was so young. Travelling to Toronto for the transplant was an adventure. I had no idea what a transplant even really meant.”

She told me that it was only a couple of years ago that she actually realized she almost died, because at 11, you often don’t quite get what’s going on around you. All she knew was that she was sick and had to get another operation.

“But her family certainly realized the ramifications of what was happening,” Kim stresses. “It’s not just the person who receives the organ, it’s their family too.”

As she prepared to share her story that day, Crystal admitted to having an epiphany. “I thought, ‘what if it was my brother or my dad lying in that hospital bed and I had to make the decision to give their organs?’ Even thinking about it made me sad and I thought, ‘how can anyone in that horrible, tragic situation have the kindness and wherewithal to think something good can come out this, and make that decision?’ It must take such strength and such faith.”

Pat Loder, whose family chose to donate her son Jeff’s organs, and who shared her story in a StoryLine video, credits the staff of OPEN in helping families through the process.

“The organ donor coordinators help people make the hardest decision. For me it wasn’t a hard decision. I knew it was right. I couldn’t stand by and watch my young son’s organs be wasted when his life was now over. We had the power to spare others the pain we were going through by saving their loved one.”

But for some, the decision is harder, especially through the sudden shock and grief.

“The OPEN team works with people who are experiencing the worst moment of their lives,” says Pat. “And they do it with such love, caring and compassion. They’re the ones who stand guard through the organ retrieval process, who ensure the loved one is treated with respect. I feel their dedication builds the soul somehow.”

According to Kim, donating a loved one’s organs can be the start of the grieving process for some families. And she agrees the work is challenging, “It takes a little piece of you each time – but gives you a piece back too.”

Pat Loder’s family recently met Jeff’s heart recipient. While the identities of organ donors and recipients are kept strictly confidential, non-identifying correspondence is facilitated through provincial transplant and donation programs. Organ donation and transplantation is a very sensitive and personal experience and many never correspond, but in Pat’s case, several letters were exchanged between her family and the recipient and, while they could not identify each other, it was clear both sides wanted to connect.

By sharing her story on social media and with local media, she and the heart recipient were able to make that meeting happen.

“We hope that by meeting this man, he can heal toward knowing this is his heart and his life,” says Pat. “The heart now is loved by two separate families and in a way we are one family. Jeff donated three organs and despite our grief, there is definitely a feeling that he managed to make a huge impact not only on three people but their families and friends. Jeff is loved by a bigger circle now. For us, organ donation has helped each of us heal.”

Edna Cahill’s family recently welcomed two new babies. Matthew’s daughters are strong and healthy. “These are milestones I never let myself even dream about having with Matthew,” Edna says. “They didn’t give us a lot of hope that he’d even finish high school. So to see him finish post-secondary, get engaged, get married, go to work, have a good job, work hard and take pride in his work, I thought, this is as good as it gets. But now we have twins! We’ve had our miracle. We’re very blessed.”

Matthew with babies Jane and Emily, who came into the world 5½ weeks early on Nov. 23. They’re still in the NICU but doing wonderful!

To mark the 30th anniversary of her transplant, Crystal Prowse was invited to parliament to share her story during National Organ and Tissue Donation Awareness Week. “To have the honour to be invited was a big deal for me. Getting to share my story and the importance of what we were talking about with people who in the power to make decisions to affect things, that was important. I wanted them to see me as the face of successful organ donation and transplantation.” 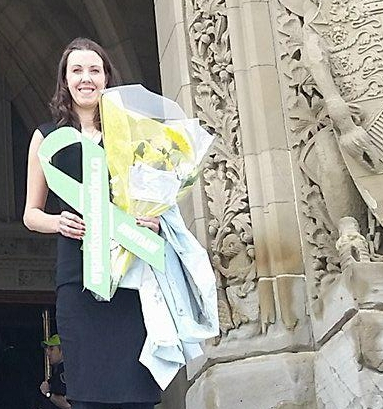 Organ donation is the ultimate gift. It’s also a personal choice. If you’re interested in becoming an organ donor, let your loved ones know and sign up through MCP. Visit the OPEN web page to learn more.

As Kim says, “I haven’t had anyone ever say to me that they’re sorry to have donated. But I’ve had people who say they wish they had.”  ■

This story was written by Robyn Lush, a communications specialist with Eastern Health.