Bassem Elshahat, a highly specialized medical imaging physicist with Eastern Health’s Nuclear and Molecular Medicine Program, recently flew back home to St. John’s, having spent a few weeks visiting Egypt, his country of birth. It had been six years since Bassem had set foot in that ancient land. Now back in Canada, Bassem and his family are in the midst of Ramadan, a time where Muslims observe fasting.

So, what is Ramadan? I met with Bassem to learn more about Ramadan, and to find out how Eastern Health helps Muslims and other patients who have diverse religions.

Bassem explained that Ramadan is part of one of the five Pillars of Islam. Islam is the second largest religion in the word, and followers of Islam are called Muslims. The other pillars include believing that there is only one God, and Prophet Muhammad is his last messenger; praying daily; being charitable towards others less fortunate; and if you have the means, visiting Mecca, Islam’s holiest city in Saudi Arabia, at least once in your lifetime.

Bassem performs five specific prayers each day, whether he is at home or at work. “I pray at dawn, noon, afternoon, sunset, and after-dinner,” Bassem says. “Each prayer takes between two and three minutes to complete.”

According to Bassem, charity is a mandatory, meaningful and vital part of being Muslim. Referred as ‘Zakat,’ this means donating a prescribed percentage of your savings to those in need every year.

The Month of Ramadan

Ramadan is considered a holy time by Muslims, and it marks the ninth month of the Islamic lunar calendar. Because it follows the moon cycle, Ramadan moves a few days every year, reoccurring at the same time every 30 years or so. Bassem has never seen Ramadan in spring.

“At least once in my lifetime I will get to experience Ramadan in very hot and very cold weather, in the summer and in the winter months, when sunlight hours vary drastically,” Bassem says. 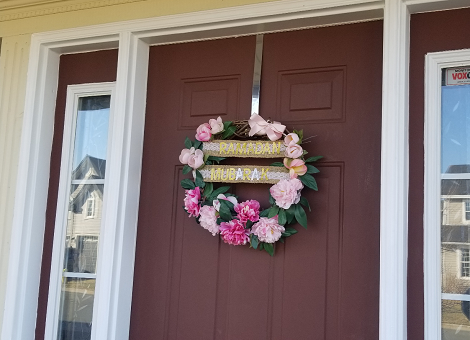 During Ramadan, Muslims around the world practise fasting. “From the first light of day, you cannot eat or drink. Nothing can come in contact with your mouth. Not even a toothpaste!” 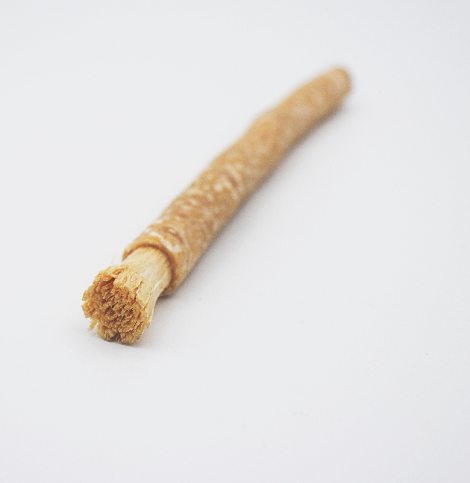 “To wash your teeth in the morning, we may use a ‘miswak,’ a special tree swag with softened bristles on the ends to clean the teeth – something that has been used for thousands of years,” says Bassem.

“This is the only Pillar of Islam that is between you and God, as no one knows whether you eat or drink; only you and God.”

Every Muslim is expected to observe Ramadan. Although there isn’t a set starting age, kids are taught by their families, and it often takes several years of training before a person can safely fast.

“My oldest daughter is now nine years old, and in my family’s tradition of observing Ramadan, she began the process of fasting when she was seven. At the beginning, she would drink water during the first hour of sunlight; and after that, she would eat and drink normally,” Bassem says.

The fasting time is slowly increased depending on each person, and family. Most people are able to partake of full fasting practices in their mid or late teenage years.

Besides fasting, Ramadan also requires abstinence from sexual intimacy between spouses during the day hours; and to be mindful of emotions and to avoid distress.

Haseen Khan, Muslim chaplain for Eastern Health, explains that in addition to the mechanics of fasting and abstinence, Ramadan also has spiritual aspects.

“The literal meaning of fasting (sawm in Arabic), is to hold back, to refrain from, to abstain,” Haseen says. “Ramadan is an opportunity for people to come closer to God, improve themselves and enhance their spirituality. Feeding the poor, paying charity, showing kindness to people, and being honest with oneself and with others are some of the practices that are highly recommended,” Haseen says.

Marking the End of Ramadan

The month of Ramadan ends with the festival of Eid ul-Fitr. At this time, Bassem and his family gather with others to commemorate the end of the fasting season. 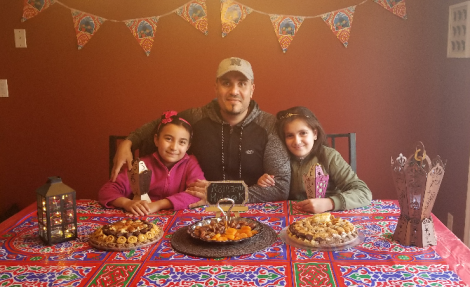 Bassem with his two children, Alma on the right and Arwa on the left

“This is a special time for us, and we will take time off to celebrate the end of Ramadan,” Bassem explains. “We will eat something in the morning, the children will receive gifts, such as new clothing and have dessert, and we will visit the mosque for prayer.”

Opting out of Ramadan is not an option, but there are two exceptions to the rule.

“If you travel during Ramadan, you may drink or eat if you must,” Bassem says. Travelling is an ancient exception that has been carried over from the time when people used camels and endured long distances in the desert, until today.

“But if one breaks fast during Ramadan, for accepted reasons, then those days can be made up at the end of the fasting season,” Bassem says.

By the same token, he explains, if a person cannot reasonably fast and that person is wealthy, then that individual is expected to give to charity and to feed a poor person for each day fasting does not occur.

For Muslims, Bassam explains, respect for life is chief among all, so if lack of food or water jeopardizes a person’s health, then that person is exempted from fasting during Ramadan. “That decision is very personal, and made between the individual and their physician or health provider,” Bassem says.

In all, Haseen clarifies that “sick people, the elderly, the travelers, pregnant women, and women who nurse babies are exempted from fasting if fasting is going to threaten their lives. If the medical routines can be adjusted to accommodate fasting, then fasting is better.” 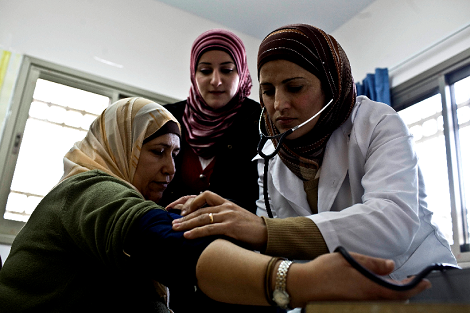 For health providers, there are important considerations when caring for Muslim patients during Ramadan, such as how their eating and/or sleeping patterns might impact upon their health, or their treatment plan. For example, some Muslim patients may abstain from taking medications during day hours, so adjustments in these cases might be required. Similarly, Muslim women prefer to receive care from female doctors, not only during Ramadan, but all year-round.

As a result, it is important for Muslim patients and health-care providers to have conversations openly and discuss care plans to ensure patients’ well-being.

While in hospital, Eastern Health’s Pastoral Care and Ethics Department offers services to assist patients of various faiths and their families to use their spiritual, faith and religious beliefs to enhance their own health and well-being.

Haseen is part of Eastern Health’s chaplaincy services, and when necessary he supports Muslim patients. Chaplaincy services include prayer, scripture readings, comfort and support, counseling and sacraments. This service is also available for individuals of other faiths and denominations, such as Christians, Sikhs, Buddhists, Hindus, Jewish and many more.

For some non-Muslims, it may be difficult to understand some of these rituals and traditions. But at its core, it seems that Ramadan is about humility and empathy, known universal virtues.

By fasting, people are reminded of the poor who may not have enough to eat and go hungry without a choice. It is about understanding and recognizing other’s suffering, a time to cleanse the mind and the body, reconnecting with simpler ways of life and helping to reflect on one’s spiritual journey.

Recognizing that each person brings valuable knowledge and perspectives – embracing commonalities and celebrating the uniqueness of each individual, is paramount for creating diverse, inclusive and respectful environments for all.

As an Abrahamic religion, Islam is a sister religion of Christianity and Judaism because they all share the same root. “Many people don’t know that we believe in Jesus and in the Bible, for example,” Bassem says.

In Bassem’s experience, everyone he has met in his couple of years living in St. John’s have been curious about his beliefs, and he encourages them to ask questions.

“My experience so far has been positive,” Bassem says. “I feel comfortable and very proud of my religion, and I’m happy to answer questions and share my experiences.” ■

This story was written by Melisa Valverde, digital communications manager, and member of the Diversity and Inclusion Committee at Eastern Health.