Whether on television or in real life, we’ve all seen images of a paramedic’s lifesaving work: ambulances screaming through the streets on emergency calls, heroic individuals loaded down with medical equipment bursting through the back doors, intent on caring for the ill and injured wherever they might be, all the while acting as an island of calm in an ocean of uncertainty.

Like all medical professionals, paramedics are givers – stewards of their communities dedicated to the health and wellbeing of their fellow citizens. And though their tireless work might be easy to see in the streets, there’s a lesser-known – but equally important – aspect of their generosity that you might not be aware of. With the holiday season approaching and the spirit of giving in the air, Eastern Health paramedics have just wrapped up an entire year of charitable events.

If you happened to visit the Major’s Path Paramedicine and Medical Transport station this past May, you would’ve been in for a big surprise. Amidst the gleaming ambulances, paramedics were setting up a triage station, assessing and classifying injuries and complaints of various ailments as nervous family members stood by watching the scene unfold. And though the ailments were common – bad tummies, broken arms – the patients were, well, unusually cute and cuddly. Because this was no regular hospital; this was a Teddy Bear Hospital fully staffed by members of Eastern Health’s paramedicine team.

A teddy bear receives oxygen while waiting for its checkup from Eastern Health paramedics.

On that day in May, over 60 children from St. John’s and surrounding communities visited the Major’s Path station, teddies in tow, to have their ailing furry friends restored to perfect health. Upon arriving at the station, each child was greeted by a member of the team and explained what was troubling their companions. Once the teddy’s chief complaint was determined, a Teddy’s Care Report (TCR) was filled out and both child and teddy were escorted to the next stop, where more paramedics gave each bear a thorough checkup. Their hearts and lungs were listened to and their primary issue was treated. One teddy, who apparently was unable to sing due to vomiting, was given a dose of anti-nausea medication and fluids and was back to singing in no time.

Though not all teddies were necessarily ill – some were reportedly just curious about how the hospital worked – each child received a certificate of participation stating that their teddy was “a super patient who showed outstanding bravery while receiving their checkup.” After each teddy was given a clean bill of health, teddies and children alike were treated to a tour of the facility and ambulances, and taken for an ambulance ride around the parking lot.

Danielle Christopher, a primary care paramedic with Eastern Health’s Paramedicine and Medical Transport team who coordinated the Teddy Bear Hospital, says the event was just as enjoyable for her and her team as it was for the kids. “While on shift,” she says, “paramedics often find themselves faced with an abundance of sad, tragic circumstances. [So] this event was such a heartwarming experience for us.” 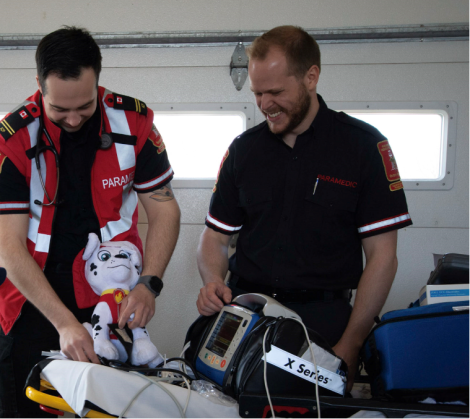 A month later, the paramedicine team took part in another successful community offering – the Touch a Truck event held by the Town of Portugal Cove-St. Philips as part of the town’s annual Regatta Festival celebrations. Though the teddy bears stayed home this time, the kids were treated to the sights and sounds of a number of construction and emergency vehicles, including an Eastern Health ambulance. Free to explore the ambulance under the supervision of paramedics, the young attendees were offered an opportunity to get hands-on with medical equipment and ask the paramedics about their jobs.

“Having such an event in the community is very beneficial,” said Celina French, an advanced care paramedic. “The children can see the ambulance from the inside and reduce their fear in the event that paramedics need to respond to their school, house or community.”

Though summer turned to fall and then to winter, there was certainly no chilling effect on the paramedicine and medical transport team’s efforts to give back to their communities. For two consecutive Saturdays in December, paramedics in St. John’s, Mount Pearl and Carbonear stationed themselves outside area Walmart stores and proceeded to “pack the backs” of ambulances with as many donations of food, clothing and toys as they could possibly cram inside.

“[We] organize Pack the Back each year around Christmas to support the Salvation Army in giving back to the communities we serve every day,” Eastern Health paramedic Steve Ryan says. “It has become a tradition in the paramedicine department over the past nine years to try to fill the back of multiple ambulances to be distributed to families in need during the holiday season.” 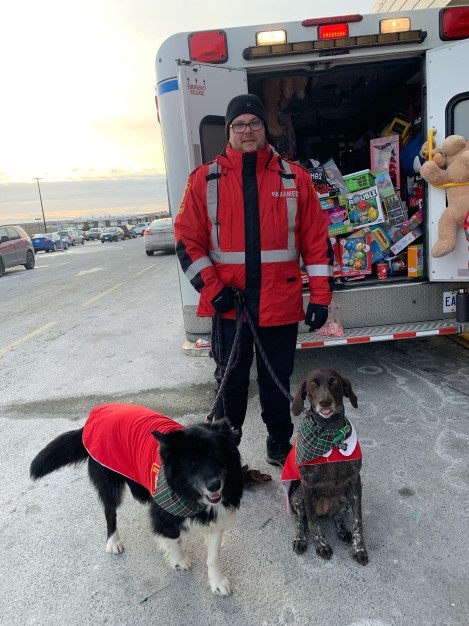 Eastern Health paramedic Steve Ryan during Pack the Back 2019

And pack the backs they did. The range of generosity was truly remarkable – giant stuffed animals, action figures, books, dolls, school supplies, non-perishable food items and even a few toy ambulances were all piled high under a canopy of clothing hung from the ceiling. In two afternoons, Steve and the other paramedics who volunteered their time managed to completely fill four entire ambulances nearly to bursting with gifts and charitable donations. 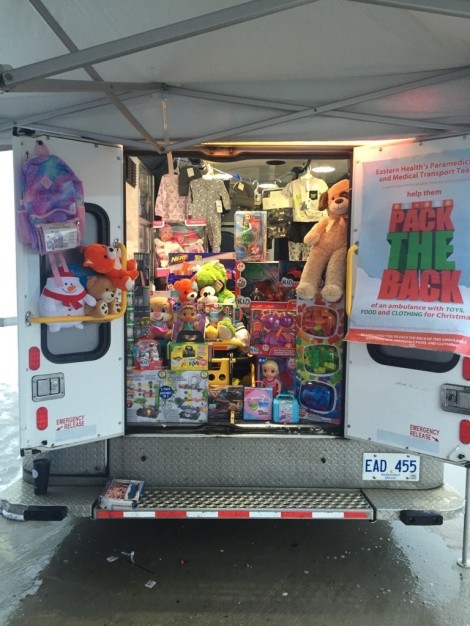 One of the four packed ambulances

For Steve, the event holds special significance. “[Participating] in Pack the Back every year, is something that I take personally. I have been fortunate in my life in that I have witnessed first-hand both sides of the story: being the recipient of charity, as well as being in the position to help those in need. There were a few tough times growing up in a single parent household where things could have been much different if not for the generosity of strangers.”

And it was in this spirit of kinship that Steve and several other team members showed up at the Salvation Army Citadel in St. John’s on December 19th to officially hand over the donations to Salvation Army for distribution within the community. All Pack the Back donations were added to toys, books and clothes collected by the Salvation Army through other donation drives, and the entire bounty was laid out on a series of tables in the Citadel’s gymnasium. Families in need could then stroll through the aisles and pick out the perfect gifts for their loved ones. 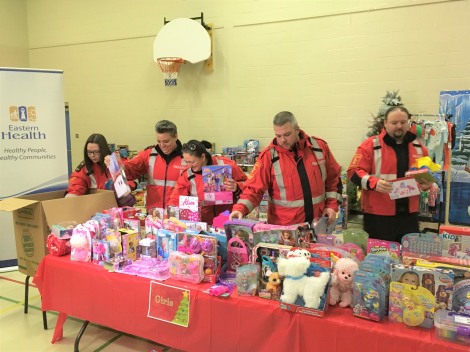 But what is it that drives the Paramedicine and Medical Transport team to give back in such big ways? When they give so much of themselves caring for the public at work, why treat teddy bears, and give kids and opportunity to see and touch an ambulance up close, and then fill those ambulances with holiday donations?

In Steve’s opinion, they help because they see the need. “Paramedics and other first responders have a different viewpoint in the positions that we hold,” he says. “We are in the community daily, we are in [our patients’] homes, and we often see the struggles that people face. There are many families that find themselves in situations out of their control – from family break ups, loss of a loved one, unemployment, mental or physical illness, addictions, or just simple bad luck. We see the need, and I think as the ‘helpers’ of our communities, we feel a certain degree of obligation to help in as many ways as we can.”

After a full year of giving back, it’s safe to say that obligation has been more than fulfilled. ■

This story was written by Grant Loveys, a communications specialist with Eastern Health.

One response to “Trucks, Toys and Teddy Bears – Eastern Health Paramedics Give Back”