When Margo Hand brought her husband, Bill, to the emergency department at the Waterford Hospital, little did she know it was only the beginning of a seven month-long journey.

“I remember dropping him off at the door,” she recalls. “The two nurses that took him were so reassuring, so compassionate. “They said ‘call us later, we’ll tell you how he is.’”

It would be the first of many phone calls and five-weeks before Margo would lay eyes on her husband again. 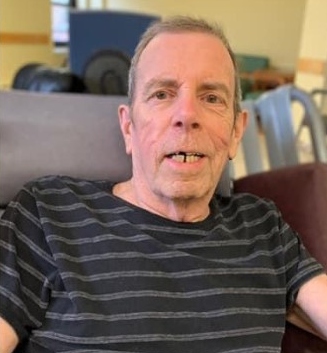 Bill Hand in his room at the Waterford Hospital.

For Katey Simms, a recent nursing graduate and new staff member at East 2A, Bill was one of her first admissions during COVID-19. “I remember thinking how difficult it must have been for Margo. To drop a loved one off and not see where they’re going, or to meet the staff. My heart went out to her.”

To go from being Bill’s full-time caregiver to not being able to see him every day was an unanticipated change for Margo.

“The only thing I could draw on was phoning and speaking to the nurses,” she recalls. “They were so fabulous with keeping me abreast of what was going on with Bill. They just got it. They gave me information I could picture in my mind. Things like, ‘he’s having a good day;’ ‘I said something to him and he laughed;’ ‘We put the country station on because he likes that.’ It was so meaningful to me.” 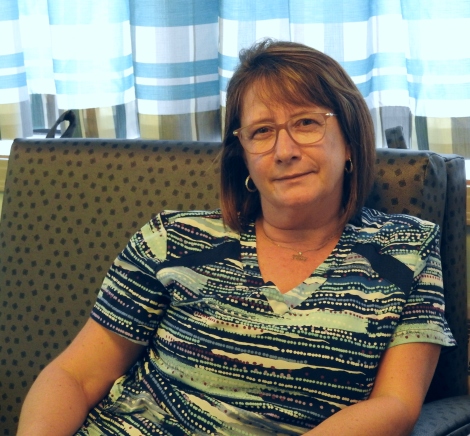 Kim Dobbin, one of the housekeeping staff shares how Margo tried to be there for Bill in spirit, when it wasn’t possible to be there in person. “During those long weeks apart, Margo made sure that Bill had a pillow with a picture of her and their sons on it. I’d see him touch it. Sometimes he’d be in the bed and I’d hold the pillow up for him. He knew who they were.”

Margo and Bill Hand have a long history with the health-care system. Over the past 10 years, Bill has had over 12 major cardiovascular surgeries. Just seven years ago, he spent 187 days at the Health Sciences Centre.

“He had an osteomyelitis infection in his foot which went through his blood stream. He was septic,” explains Margo. “He was delirious for four months. He didn’t know where he was or who he was. I was told at that time that Bill would likely develop Alzheimer’s or dementia.”

Unfortunately, that prediction came true and four years ago, Bill was diagnosed with dementia. Bill and Margo became quite familiar with going to the Waterford Hospital out-patient unit for various appointments.

When his foot became infected again this past spring, Bill became septic for the second time. And what Margo believed would be a quick adjustment of his medications, became a long-term stay in hospital.

What helped the couple adjust and what stands out to many of the staff at Waterford Hospital East 2A wing was Bill and Margo’s positive attitude.

Becky Sparrow, one of Bill’s personal care attendants recalls, “I found Bill witty. No matter how sick he was, he always had something funny to say.”

Unfortunately, Bill continued to get sicker. “He was deteriorating very quickly,” says patient care facilitator, Lori Russell. “We were concerned.” 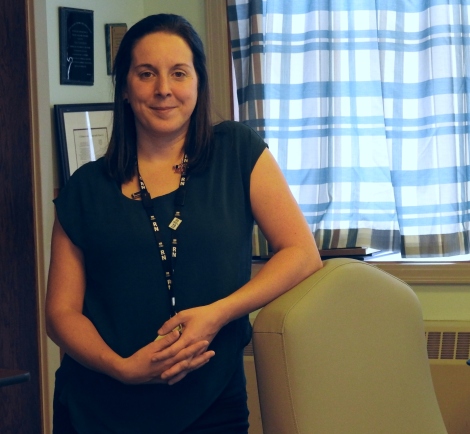 Given Bill’s deteriorating health, he was deemed active end of life and was placed into palliative care. While being palliative wasn’t good news, because of COVID-19 regulations, it meant his family could now visit with him, in person with protective equipment according to COVID-19 guidelines.

“I was told he had less than a week. It took me right out of left field,” says Margo. “I hadn’t expected that at all.”

Margo with sons Mitchel and Graham.

But after seven days, Bill began to improve. Margo attributes some of this change to the power of love.  She believes being able to be with him helped him keep his fight and spunk.

“He’s like an old dog,” she says, “but he has a really good stubborn streak. Coming back to see him when we did, gave him the will to be stubborn again.”

By the time Bill was moved from Palliative Care, COVID-19 visitor restrictions had eased, and Margo and their sons were permitted to continue to visit, while following the support-person and visiting guidelines. He was then moved to North 2A, a transition unit at the Waterford Hospital, to await placement in a long-term care facility.

“I don’t know where to begin with the words or accolades I have for the staff of East 2A. They are by far the best group of doctors, nurses, PCA’s, housekeepers, dietary staff and administrative staff that I have ever had the pleasure to deal with. Not only did they care for my husband in going above and beyond on a daily basis but, they cared for me and our sons in the same way. They were willing to listen and explain things over and over, if necessary.

They took an interest in his life, along with his care.”

Nurse Katey Simms feels thankful to be part of the team. “I’ve been a nurse for just over a year and I’ve worked at various places during my training, but nothing like East 2A. It’s a very special place. The comradery, the teamwork, the atmosphere, all contribute to the patient and family-centred care we all strive to provide. It’s nice to know we’re appreciated and that they know that we’re trying our best for them and their loved ones.”

Bill and Margo at his new home at Pleasant View Towers.

“In all our years in the health-care system, we have never experienced such a high level of personal care,” says Margo. “It’s more than bricks and mortar. It’s the staff.”

This story was written by Robyn Lush, a communications specialist with Eastern Health.

8 responses to “Angels on East 2A, Waterford Hospital”